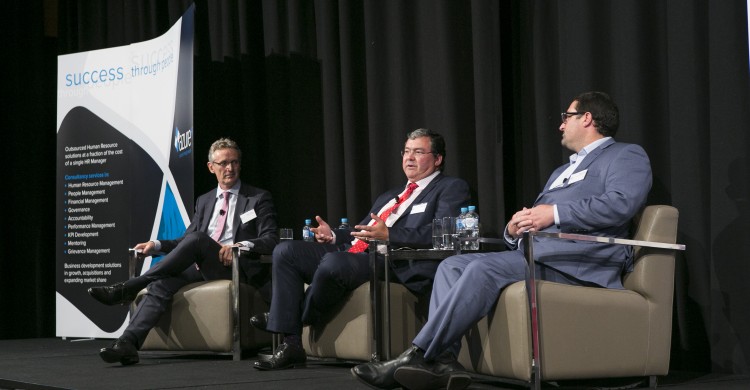 According to investment and resources experts the year ahead will see gold continue to shine, a strong appetite for resources investment risk, collaboration between operators and suppliers grow and the rise and rise of specialist funds.

You could have heard a pin drop with the 300 strong crowd at the February luncheon enthralled by the insights on the year ahead provided by managing directors of PCF Capital Liam Twigger, Argonaut’s Eddie Rigg and Blackham Resources’ Bryan Dixon.

The conversation was wide ranging and covered a lot of ground. Some of the key themes included:

It is all about Gold.

Our panel of experts all put their money on gold again for 2017 as “an old reliable in these volatile times”.

For gold miners the trick he says is getting people to back you through the cycle.

“In our game, we have to work counter cyclical if you want to achieve anything.”

Responding to a question from the audience, PCF Capital’s Liam Twigger said he couldn’t see a return to the monetisation of gold at this point in time. But the outlook for gold remains strong.

“The price of gold reflects the sum of all fears. It is rising at the moment, because people are worried about the currencies.”

Liam says Lithium is an “exciting commodity”, linked to energy and new technology. But whether it is going to be sustainable is the question.

“It’s lovely when you have a run on a commodity and WA is full of it. We are a blessed state. he said.

“The greatest thing about Lithium is we have a downstream processing plant being built in WA. Finally, we have a commodity that we can mine and we can process here and add some value and learn from that.”

Argonaut’s Eddie Rigg agrees there is less certainty around Lithium, with a smaller market (approximately $1bilion), more projects coming on line and the rapid pace of technology development.

“Lithium is good and there is definitely room for more than one party. But who knows next time it might be a Cobalt or some other type of battery. Technology is changing so fast.”

While the top end risk indicator of exploration isn’t currently attracting investment, Liam says anything that has a pathway to production and has resources, and people can see cash flow is going to attract interest.

“Lithium is hot at the moment, whether it is vanadium or silicon, but so is gold, copper, lead-zinc, and nickel to some extent, but you do have some dynamics out of Indonesia and the Philippines that can effect supply.

“For those commodities, the outlook is very good, as long as there is a pathway to production.”

Liam say when it comes to debt the banks are certainly open for business with the terms of debt favourable and up to 75 percent gearing on offer.

“It is not just the fact that you can borrow cheaply it is the volume of the dollars the banks are prepared to lend. There are a small number of projects that might be seeking bank debt and the gearing the banks are offering is very aggressive.”

Eddie says when it comes to raising debt to build a mine you can currently borrow money at below 5 per cent.

“That is risk on when it is cheaper to build a gold mine than to build a house.”

Eddie and Liam predict the change over the next 12 months will be the banks stepping into the acquisition market and increase in corporate activity.

The rise of specialist resources funds

Eddie says another indicator of ‘risk on’ is the significant and rapid growth in the number of specialist resources fund.

He says while there were more generalist investors in the market now he was surprised by the number of specialist resource funds at the Indaba conference in Cape town earlier this month.

Outlining five new specialist resources funds, that have raised around a $1billion in the past three months, he said these funds are increasingly active in the market.

“These funds didn’t exist two years ago,” he said.

He said in the past they have been funded by the major US pension funds, but this year for the first time the funds were coming from the major European pension funds.

Another trend we can expect to see a lot more in the future is service providers competing with the banks to investing in projects.

Rather than waiting for a prefeasibility or feasibility study to be completed we are seeing more contractors stepping up and investing early to secure the business.

Bryan says those around the mining sector understand see the value in the market at the bottom of the cycle.

“They are using the balance sheets gain through the good times and are some of the few value investors in the market.”

Eddie says Ausdrill is a leader in this tend having completed several transactions to boost their bottom line.

“Millennium is one of the great success stories,” He said

“They were on the verge of administration and were able to pull together a large amount of money provided by the contractors,” he said.

“Only $1million of the $21million raised came in from new investors.”