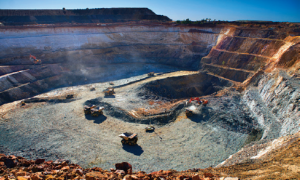 Gold had a robust year in 2016, but the eyes of emerging mid-tier gold miner, Ramelius Resources, are firmly on the next two years and a target of up to 150,000 ounces a year gold production by 2018. Underpinning the focused and profitable miner’s vision and determination to be producing 135,000 ounces of gold over 2017 (up from approximately 111,000 ounces in FY2016), and more the following year, is a robust four-year strategy boldly rolled out over 2016 for all to see. And see, they did. In 2016, in London and New York, key and highly sought after institutional investors for the first time tapped into the Ramelius share register in visible numbers. They doubled their presence from 10% to 20% on the company’s register – one which, despite 10 years on the ASX, has just 525 million shares on issue. The entry point for these UK and mainly North American kingpins was a heavily oversubscribed mid-year $25 million placement. With North American equities markets historically a benchmark for gold investment globally, their appearance in sizeable numbers on the share register of a company is recognised by the resources and equities sectors generally as an independent endorsement of a company’s long-term upside. Ramelius Managing Director Mark Zeptner is happy for these ‘insto’ (institutional) numbers to grow even further. “It is these specialist high-end investors and market players that can bring long-term financial clout and corporate guidance to help a multi-project gold miner, developer and explorer like Ramelius grow even stronger – so all shareholders, large and small, benefit.” Mr Zeptner has given these investors and the market cause to sit up and take notice. Firstly, his growth strategy is grounded in four unshakeable rules – sound financial principles, proven geological and mine modelling, people management and sustainable cost efficiencies. From his office desk in East Perth, Mr Zeptner points to why these cornerstones are front and centre for Ramelius. “We’ve launched an accelerated $75 million capital spend between now and FY2020 – with $60 million of that earmarked to speed up mine extension, and significant brownfields mining and exploration work just in the next 24 months alone. “Our flagship hub of gold mining at our Mt Magnet project in WA gets the bulk of the attention, as does our new Vivien gold mine. We are about project development and more rapidly bringing forward production wherever and as quickly as possible.” Mr Zeptner’s on-the-ground operations are matched with a fierce and hawkish approach to cost and capital management – to achieve commensurate reductions in that determinate of all determinates, the all-in sustaining cost (AISC) number. “This is now the real and undisputed king of measuring the margins in a gold company’s actual and full costs, from the first dig to the final gold bar pour and point of sale proceeds,” Mr Zeptner told Minesite. “The AISC number is almost the first go-to point for fund managers, brokers, sophisticated and retail investors to assess a company’s worth and upside – so we want to ensure the Ramelius AISC story ranks well against our peers.” Ramelius’ AISC estimate for FY2017 is A$1,050 per ounce. Along with a strengthened share price, the cushion and upside of a strong cash-in-bank position (some forecasters are suggesting circa $100 million within the next 12 months), Ramelius should enter 2017 with no debt, an undrawn bank facility and a risk-mitigating hedge book that stretches out to June 2018 on a hedge book averaging A$1,650 per ounce.

Geologically and operationally, Mr Zeptner’s philosophy is also simple – build mine life at a faster rate than depletion of gold ore reserves through new open pit and underground gold mines, life of mine extensions and brownfields exploration. “In many ways, mine extensions for a company the size of Ramelius, and with the hub of assets that we own, are simply common sense,” Mr Zeptner said. “Within Mt Magnet, we can bring forward development of both high-grade underground ore close to our processing plant, as well as longer term open pit base load feed volumes. We plan to parallel that with exploration for deeper high-grade gold reserves downdip of our current mine plan for Mt Magnet, as well as deeper extensions and offsets of the high-grade ore bodies currently being worked. “The third plank is our greenfields exploration endeavours and these will primarily be across our Tanami holdings in the NT, a known and super rich gold footprint which gave birth to the ongoing and highly successful suite of Tanami gold mines.” The Mt Magnet mining operations currently have a mine life of around four years. The new Kathleen Valley open pit gold mine to the east and just north of Leinster is a quick one-year operation, while the new underground Vivien gold mine near Leinster (the company’s highest gold grade operation) had an initial two-year mine life but the company is now planning for a four-year life. Ramelius enters 2017 having commenced brownfields development of its Titan open pit at Mt Magnet, as well as the underground Water Tank Hill gold reserves, a historically mined deposit sitting in the south-east corner of the Mt Magnet footprint near the existing St George underground decline. This will allow infill resource drilling at Water Tank towards the end of 2017, but the development program may also be brought forward to the first half. Mine life extensions are also expected at Mt Magnet’s 241,000 ounce maiden resource Milky Way deposit, a potential large tonnage open pit operation, and nearby Brown Cow deposit. Some 30 kilometres to the north, the Blackmans open pit gold project is also being readied for an initial one-year mine life. All will feed ore into the company’s Mt Magnet processing plant, creating significant opportunity to enhance the mill’s cost and efficiency profile. The opening half of calendar 2017 will also see Ramelius build on its infill exploration and extensional drilling to take the Vivien gold mine even further underground, and Kathleen Valley is also being included in the action, with exploration work planned on deeper targets. The one arena where Ramelius is keen to develop new pastures is its 1,700 square kilometres of highly prospective gold ground within 100 kilometres of Newmont’s 20 million ounce Callie gold mine and Granites treatment plant in north-west central Northern Territory. The high-grade Granites gold footprint has been a NT success story since its very first founding and development by the then North Flinders Mines from the late 1980s. While acknowledging his measured production and development approach, Mr Zeptner remains open to genuine value adding acquisitions. “We can afford them and we are happy to consider bolt-on opportunities for Mt Magnet, or stand-alone projects. “It is a continuous and challenging cycle of successful gold exploration, discovery, development, commercialisation and reserve replenishment – and that remains Ramelius’ focus,” concluded Mr Zeptner.