Industry to tackle unprecedented decline in mining as a career pathway 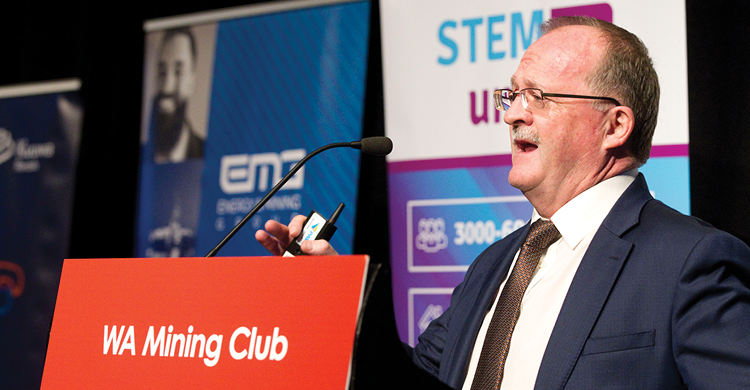 Industry to tackle unprecedented decline in mining as a career pathway

An unprecedented decline in young people choosing mining as a career and how the industry can tackle this issue were some of the hot topics addressed by CEO and Managing Director of Western Areas Dan Lougher at WA Mining Club’s March luncheon.

According to a report published by the Foundation of Young Australians, 75% of future jobs will involve STEM.

However a survey released last year from 1,061 senior high school students and first-year university students aged between 15 and 20 found that knowledge of mining careers was extremely low, with 59 per cent of young people knowing nothing at all about mining careers.

The survey, performed by Youth Insight, also found that only 30 per cent of students had an interest in a career in mining or the mining equipment, technology and services (METS) sectors.

Dan said the skills shortage and younger generations lack of interest in STEM career pathways was a great concern for the next generation of mines, including Western Areas own nickel mine, Cosmos, which commenced a decline rehabilitation in January 2019, and will rely on skilled labour.

With a 520 person camp being upgraded and a ten year mine life on reserve for Cosmos, he said the company would need to draw on offshore students to fill labour gaps, which is not a positive solution for the industry long-term.

“We are not going to get enough graduates through our own colleges in the next five years – we are still going to be short,” Dan said.

Dan said practical experience in the industry could make a big difference as to whether a young person could be enticed into mining. He encouraged the audience to become ‘mining influencers’ to help combat the issue.

“I think we need to have a good look at ourselves, myself included.  I have three boys, none of them are miners and I’m shocked,” Dan said.

“We should be taking pictures of people who enjoy their work on mine sites and marketing these. We can show how happy and smart they look going to work in their reflector shirts. I think the younger generation would be very impressed.”

Growing up in a core mining village in Wales and the youngest in a family of 12 children, Dan conceded he was initially a foreigner who came to Australia to fill a job in the mining industry.

“We have great opportunities here, so we have to take on board our responsibility to find new, local people to come into the industry. We don’t have an excuse to not go out and tap somebody on the shoulder,” Dan said.

“We’ve heard in the press over the last couple of weeks two companies being penalised by the share market because they couldn’t deliver their targets because of a lack of skilled fitters, boiler makers and electricians.

“This is no longer government policy. The industry needs to take control of its own destiny,” Dan said.

RUC Cementation Mining Contractors Managing Director, Barry Upton said the WA Mining Club had worked behind the scenes to understand how they could address the issue of STEM.

“The WA Mining Club talked to mining companies, government, education providers and teachers and what we found is our industry isn’t good at presenting a united front to educate students, families and teachers on the value of STEM and a career in mining,” Barry said.

As a result, the WA Mining Club has partnered with Firetech, a STEM focused education provider that is teaching STEM and digital technology to 500 Perth students each week.

RUC has provided seed funding and Platform Communications in-kind marketing for the program, which was launched at the WA Mining club luncheon.

“Personally I saw the investment as a no-brainer.  The initiative is not only necessary from an industry perspective, but also from a corporate social responsibility perspective,” Barry said.

“For Australia and the mining industry to remain competitive, we need to introduce students to STEM.  It’s now more critical than ever, and it should have been done yesterday.”

The program will target year nine students and provide hands on learning, introducing them to the world of robotics and drones.

“This means we expect to inspire anywhere from 3000-6000 students every three years. We hope to expand the program in its second and third years” Andrea said.

“Our role will simply be to ignite interest and bridge the gap between STEM and real-world applications and introduce them to real-world job opportunities – including mining.”

PART TWO: NICKEL – NOT SO FICKLE?

The audience also listened to Dan’s views and expectations for the nickel market, with the impact of the super growth of the electric vehicle industry discussed.

“Somehow the electric vehicle lithium ion battery phenomena seems to have bypassed nickel, even though the most metal in the battery is actually nickel. So we are having a bit of a resurgence now,” Dan said.

Dan said nickel use in batteries was growing by 30–40% a year from low base, due to the increasing ratio of nickel in lithium ion batteries for the electric vehicle industry.

“The ratio for the new battery is eight parts nickel, one part cobalt and one part manganese so it should actually be called a nickel-lithium battery, not the other way around. But we will let them have their day in the sun and we will be coming up with a fast approach towards the end of the year to change this,” Dan said.

However, with 70% of today’s nickel going into the stainless steel industry and the lithium battery industry only accounting for 4-6 per cent of the nickel market, he said this percentage was not enough to swing market value alone.

“Stainless steel will remain the biggest growth area for nickel, with consumption growing at five per cent a year,” Dan said.

With the current nickel price still too low to incentivise new project development, Dan said the “nickel pie” was not expanding and estimated an additional one million tonnes of nickel units would be needed in the next ten years.

“This will be a challenge for the industry to produce a bit more nickel in the next 10 years, with the world not discovering enough nickel sulphide mines.

“Nickel sulphide mines are the preference because laterites don’t have sulphur. Every laterite project to date has not reached nameplate capacity. Laterite is a difficult business and the CAPEX is huge. In my books, sulphide is the way to go and that’s why we are very excited.”

With two kilometres of Western Area’s Cosmos decline rehabilitation complete and a mine life of more than 10 years in reserves, the company has forecast $A15000 -17,000 per tonne for the project.