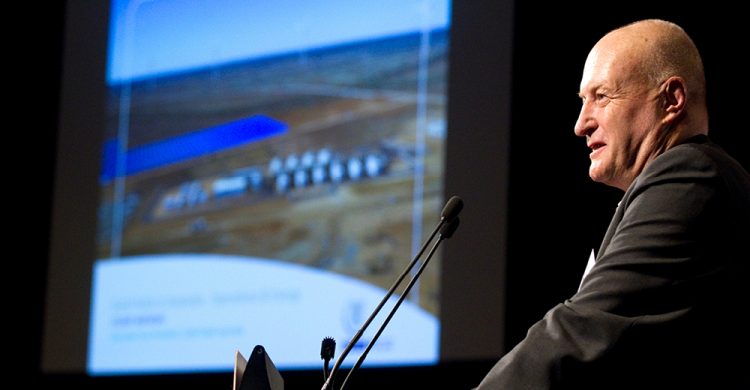 Lowering the cost of energy and increasing exploration are key to maintaining Australia’s standing as the jewel in Gold Fields’ crown according to Stuart Mathews, Executive Vice President of the company’s Australasia operations.

In a presentation to the WA Mining Club, Stuart said that its Australian assets remained core to the Johannesburg and New York-listed company.

The company’s three mines in WA – Granny Smith, Agnew and St Ives – produce 43 per cent of the group’s 886,000 once gold production and 42 per cent of net cash flow, with the addition of the new Gruyere mine set to push this proportion higher.

“Going forward we will be aiming for around a 50 per cent contribution,” Stuart said.

Gruyere, a 50:50 joint venture with Gold Road Resources, poured its first gold bar on June 30 and is already tracking at the top end of guidance.

The company is not resting on its laurels and is committed to maintaining its $85-100 million a year exploration spend in Australia.

That budget is being put towards continued in-mine growth at Granny Smith, development at Agnew (Waroonga and New Holland) as well as the emerging Redeemer complex at the mine, and growth at the Invincible deposit at St Ives.

Stuart went on to say that St Ives is now a sustainable operation at its current run-rate of 360,000 ounces a year, with visibility at this level for the next eight years and potentially beyond.

Sustainability is not all about operations, he said, with the company focusing heavily on “shifting the dial” on energy use – especially in Australia.

“Gold Fields has a strong emphasis on sustainability as a company,” he said  “We don’t spend a lot of time talking about operations given that we have proven consistency of delivery over the long-term. Instead, we look at ways to deliver operational and financial gains that are relevant to society and have positive impact on our sustainability goals.”

He said Gold Fields had a role to play in tackling climate change by introducing renewable energy options.

The business case for renewables was gaining relevance for operators big and small, with energy comprising around 25 per cent of total costs for most mining operations.

At Agnew alone, the company has invested in five wind turbines producing 18MW and 10,000 solar panels that produce 4MW. The system is fed into a 13MW/4MWhr battery unit underpinned by a 16MW gas plant.

“If we don’t do anything about climate change and energy security, people won’t want to work with us, and investors will choose not to invest in us,” he remarked.

“I was at a banking function recently and delegates were commenting that shareholders are now more socially conscious; they are asking questions around where their money is being invested, and if the company meets sustainable goals.

“Ultimately, we have a responsibility to operate in a responsible and sustainable way – globally and locally.  It’s equally important that we look at ways to positively contribute to community goals as well as meet global aspirations.

“We are going to wean ourselves off electric. Everyone here in the room is probably on the same mission. (But) the scale of what we need to do, some of the technology is not there yet.

“Gas is a key to transition us. It is clean and low cost. We are diversifying energy through gas, solar and wind.”

Taking questions after the presentation, Stuart was asked about Gold Fields listing in Australia.

“I don’t know how many times I get asked that one,” he said. “I think you would see there would be real value if we were listed here, but…there is no intent to list in Australia at the moment.”