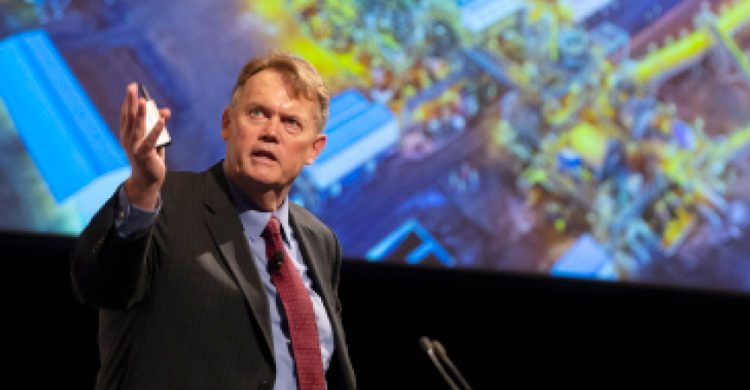 Curtin University alumnus and resources executive Peter Bradford has received an Honorary Doctorate of the University in recognition of his outstanding leadership, advocacy and philanthropic support of mining education.

Mr Bradford, Managing Director and Chief Executive Officer of mining company IGO, is the Chair of Curtin’s WAIT Alumni Scholarships Campaign Committee. He graduated from Curtin’s Western Australian School of Mines in 1978 with a degree in extractive metallurgy.

He is a long-standing committee member of the WA Mining Club. WAMC President Damian Quail said Mr Bradford was a very deserving recipient.

“For many years he has demonstrated leadership and commitment to supporting the next generation of miners, both personally and through arranging funding for multiple WA Mining Club Student scholarships,” Mr Quail said.

Curtin University Vice-Chancellor Professor Deborah Terry said she was honoured to present the award to Mr Bradford for his outstanding contribution to Curtin.

“Mr Bradford is a true champion of education, whose philanthropic and mentoring work has helped future generations embark on a career in the resources sector and thereby ensure a sustainable and robust WA mining economy,” Professor Terry said.

Mr Bradford believes in working towards greater gender diversity and promotes this in the industry through his association with the Women in Mining Western Australia mentoring program.

His achievements span decades. He has a commitment to giving students a life-changing gift to pursue higher education through scholarship programs. He is a mentor to students, graduates and mining professionals.

“He has personally established two endowment funds at Curtin – the IGO Scholarship supporting students to study at WASM and the Peter Bradford Scholarship which is open to students across all faculties” Professor Terry said.

“In addition, he is the Chair and founder of the successful Brighter Futures Scholarships Program, which to date has raised $1.2 million to fund scholarships for Curtin students facing financial hardship.

“Mr Bradford also brings to Curtin more than 35 years of local and international experience in gold and base metals mining operations, exploration and development, as well as current industry knowledge and insight as the Director of Perth-based mining company IGO Limited.”

Mr Bradford believes it is important to give back to the industry as he connects his successful career to his studies. This, combined with his passion for education, has seen him go above and beyond to create these sponsorship opportunities at WASM and across Curtin for students facing financial hardship.

Mr Bradford was presented with his Honorary Doctorate at a graduation ceremony on 14 February.