17 Days that changed my world, and saved 33 lives 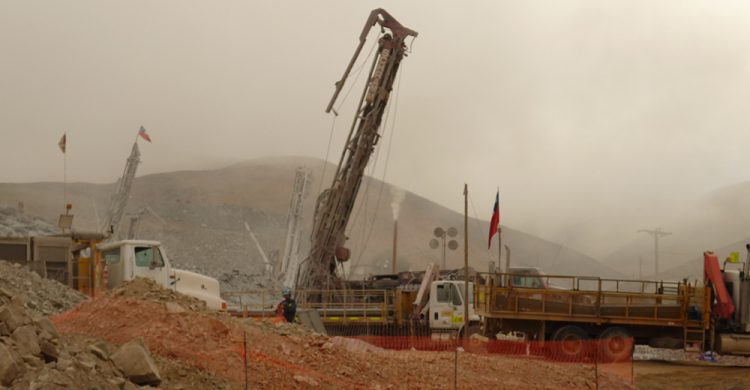 17 Days that changed my world, and saved 33 lives

With unplanned and unseen underground obstacles conspiring to thwart even the best drilling plans, there is always plenty riding on the outcome, including reputations, and potentially millions of dollars to be made or lost.

But what if lives not money were riding on the outcome? If standing on the sidelines were not disappointed geologists, engineers, and drilling crews but families desperate for news of miners trapped kilometres underground?

And what if, when you broke through to an area confident of finding those trapped miners you found only rubble?

The San Jose copper and gold mine in Chile is 800km north of Santiago, in the Atacama Desert which sits between the Andes and Chilean Coast Range. The area receives less than 1mm of rain a year and some parts of the desert have no recorded rainfall.

The mine is 120 years old with a main path extending 720m below the surface.

Thousands of kilometres away in Perth, IMDEX directional drilling expert Kelvin Brown was aware of the news, his interest piqued initially by the reference to mining.

“There were a couple of pieces on the ABC,” Mr Brown says. “I remember thinking they’ll be no good result; they had no chance.”

A few days later Mr Brown was on site, using his expertise and tonnes of equipment sourced from operations globally, with a plan to find the miners.

Previous drilling operations had failed to find the men, but hopes were high that Mr Brown — whose journey from Perth to Chile had been fast-tracked by the Chilean President and the country’s military — would deliver success.

“Within four days I was in Chile and my world flipped upside down and I have never been the same since,” Mr Brown says.

For Mr Brown, the sense of excitement and adventure evaporated when he arrived at the mine site, saw the families of the trapped miners, and recognised the enormity of the job.

“One of the toughest things I’ve done is talking to the families and telling them that we would do everything we could to find the miners,” Mr Brown said.

That was before a breakthrough hole delivered only heartbreak. Drillers had reached an underground area they felt could contain the miners, but they found only rubble.

“That’s when it really hit me,” Mr Brown says. “Post-traumatic stress came in for me. We’re in the back of a truck looking down the camera, pretty excited and we were expecting something good — and it’s just rubble.

“I thought this is hopeless. Everyone hit this low. It’s one of the lowest feelings I have ever had. It was hard. Work wise I was doing it on my head. All work things I had covered. What I wasn’t prepared for was the mental side of things. I have a newfound respect for people working in emergency response. Their mental resilience must be tough as hell.

“It was tough after that. Every day was just grinding away; and that feeling of hopelessness.”

Several holes had been drilled before Mr Brown arrived, but the Chilean crews were attempting to drill direct from the surface to their target: the rescue chamber.

“Drilled holes don’t go straight,” Mr Brown said. “The ground doesn’t want to behave. They were trying so hard, and the harder you try the more the holes deviate.”

Mr Brown devised a drilling campaign using his directional drilling expertise that included starting new holes and, for the sake of local politics, attempting to correct some of the existing holes.

Millions of dollars were being spent to bring in huge drilling rigs and keep them running. The mine site was dotted with smaller rigs all punching away in a desperate attempt to find the miners.

The rigs never stopped, and the crews hardly slept. Accommodation for many, including Mr Brown, was in basic tents. Every waking moment was focused on the rescue.

Families had been allowed inside the mine site; their presence a never-ending reminder of what was at stake.

The breakthrough finally came about 2am on August 22, 17 days after the collapse.

“There was a lot of activity at the other rig.” Mr Brown said. “They had punched through into the rescue chamber and they heard banging on the rod. The miners had grabbed rocks and tools and were hitting the assembly and that resonates all the way up.

“We knew what the sound meant. At least one person was alive.”

When the drilling rod was removed there was a note attached: “Estamos bein en el refugio loss 33 (we’re fine in the refuge the 33).”

“We weren’t expecting that. I couldn’t read Spanish, but I could see 33 and I knew what that meant,” Mr Brown said.

Emotionally and physically exhausted, Mr Brown left the site for Copiapo intending to do nothing but sleep.

Wild celebrations throughout the town thwarted his plans.

Extreme media scrutiny followed as Mr Brown was sought out to tell his story.

He eventually returned to Australia but went back to Chile for a 60 Minutes report.

“I will never forget that day,” he said. “For me I wonder where I would be now if it hadn’t ended like that.”

It took 17 days to find the miners in the rescue chamber.

It took another 52 days for them to be retrieved.

The last man out was shift foreman Luis Alberto Urzua Iribarren, 54. He emerged from underground in the specially prepared rescue capsule named the Phoenix about 22 ½ hours after the extraction operation began.