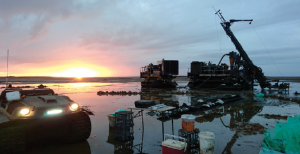 During last year’s merger between Sirius Resources and Independence Group, which involved a cash and scrip offer, Sirius’ Managing Director, Mark Bennett, felt it was important for Sirius shareholders to reap the benefits. They received a shareholding in a new vehicle containing some of Sirius’ exploration assets, which would be more highly leveraged to success in a new, smaller company – in effect, a second version of Sirius Resources. S2 Resources (S2) was demerged from Sirius Resources in September 2015, and listed on the Australian Securities Exchange the following month. S2 commenced trading with Sirius’ former Polar Bear project in Western Australia and various exploration properties in Sweden and Finland, as well as $22 million cash to vigorously explore these. As former Managing Director of Sirius Resources and now head of S2, Mark Bennett was also able to handpick key members of the original Sirius team to join S2, resulting in the new company not only having prospective assets and plenty of cash to do them justice, but one of the best exploration teams in the business.

“S2 has wasted no time pursuing its goal of making another significant discovery and providing substantial returns on investment for its shareholders. This can be demonstrated by the delineation of two new gold resources at Polar Bear, as well as the identification of over 60 new volcanogenic massive sulphide (VMS) targets at its Skellefte project in Sweden,” said Mark Bennett. The company has also strengthened its Board with the appointment of Grey Egerton-Warburton (former Head of Corporate Finance at Hartleys), and reinforced its balance sheet with a strongly oversubscribed capital-raising and share purchase plan, which puts it in the unusual position of having over $27 million cash to pursue its ambitious goal of following in the footsteps of Sirius. At its Polar Bear project, S2 has so far identified over 200,000 ounces of gold resources at the Baloo and Nanook deposits. In July 2016, they also discovered a new zone of gold mineralisation at the Monsoon prospect, midway between Baloo and Nanook. Baloo, Monsoon and Nanook all occur within a 10-kilometre long stretch of a gold-prospective trend beneath the salt lake of Lake Cowan, between the highly endowed Norseman and St Ives gold mining centres. S2 owns a 30-kilometre long sector of this trend, which is considered to be part of the richly mineralised Zuleika shear zone, and is the same trend that hosts Gold Fields’ 1.3 million ounce Invincible gold mine along strike to the north of Polar Bear. S2 is planning a major exploration campaign of this trend during FY2017. “As interesting as Polar Bear might appear, S2 is equally keen on its Swedish exploration project which is located in the Skellefte belt of northern Sweden, close to the existing mining and processing operations of Swedish base metals giant, New Boliden,” said Mark Bennett. “S2 has been able to acquire the dominant ground position in this highly endowed belt, which contains numerous large polymetallic (copper-zinc-gold-silver) VMS deposits. Despite being a long-established mining district, the Skellefte belt is surprisingly unexplored. S2 has flown the first-ever helicopter-borne electromagnetic (EM) geophysical survey in this district and has identified over 60 EM anomalies in close proximity to known base metal deposits.”

In March 2016, the first of these anomalies was drilled primarily to confirm the validity of using this technique, and the first drill hole intersected zinc-bearing massive sulphide mineralisation at what is now termed the Svan Vit prospect. Three holes were drilled before the summer thaw prevented more drilling, but these three holes and subsequent down hole EM at Svan Vit have defined a zinc-bearing mineralised zone that is barely tested by drilling. Drilling is scheduled to recommence in October once the ground refreezes, and S2 intends to complete the drilling at Svan Vit and test a further 10 EM anomalies during a five-month long winter diamond drilling campaign, which will run until March 2017. “Although it is early days, the company is highly encouraged by hitting a zinc VMS deposit in the first hole, on the first anomaly of 60, in the first-ever airborne EM survey of this highly endowed but under-explored mining district,” said Mark Bennett. “S2 is ready to go – for gold in Australia and for zinc-copper-gold-silver in Sweden – with the cash and the people to make it happen,” he concluded.