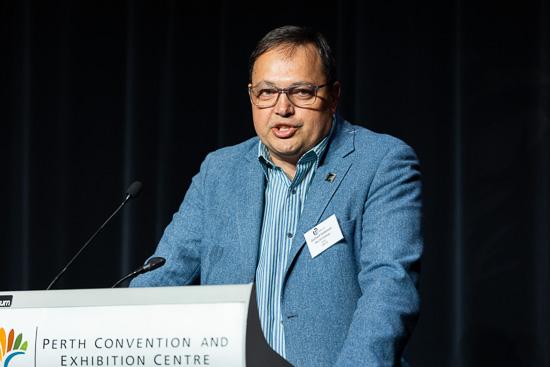 The October WA Mining Club luncheon was a vibrant affair, with an audience of 500 plus and a quick, slick change of venue to the Bellevue Room at the PCEC.

Club President Natalie Taylor welcomed members old and new, and noted the number of new members continues to grow at a rapid rate.

She also spoke of the huge loss to his family and the mining industry of club stalwart and former Vice President Peter Bradford, and all raised a glass to toast the all too short life of a remarkable man.

The guest speaker was CEO of Roy Hill Gerhard Veldsman, who ranged across topics from inclusivity in the workplace, public perceptions of mining and its integration into the school curriculum.

Gerhard returned to some key themes throughout; the tax constraints to entering the mining workforce for older Australians and veterans, aiming for greater female involvement, and redeployment of workers moved on by technology developments.

‘There are hundreds of thousands of workers available, people like us, who’re passionate about going to work every day.

‘We need those workers, especially as we rapidly approach decarbonisation.

‘Why do we have taxation rules that hold people back from contributing to the economy?’.

He says a stable workforce pays its own way in terms of productivity and that offering careers, rather than jobs, with family-friendly rosters and cost-competitive salaries are what attracts today’s workers.

‘When we rolled out our automation program at Roy Hill, there were 350 truck drivers we wouldn’t have a job for over the next three years.

‘It was an opportunity to retrain, redevelop and look at where else they could slot into our system.

‘From workers’ input, we learned that to service a truck, only three-quarters of the jobs need a trade certificate.

‘We’ve turned that system around, and now we have one diesel fitter with three trade assistants.

‘Others are upskilling elsewhere and driving trains.’

Roy Hill encourages students to study STEM subjects and has a program for girls from years 8 – 11 to fly on-site.

“We emphasise that mining is one of the most diverse industries that you can get into, it’s not just dig it up and ship it out; there are opportunities to work as a medic, in environmental management, in laboratories.

‘And maybe the most important of all, in the catering teams.’

To wrap up, Gerhard spoke about the benefits of workers being involved in profit sharing as happens at Roy Hill.

“Of course workers are always happy to be involved in these schemes, but it has positive effect on companies too, beyond happy staff.

‘We’ve found that profit sharing has made a huge difference to a lot of metrics like productivity and delivering on work expectations.

‘An example is inclusiveness in teams; profit sharers are three times more likely to be a part of that.

‘They are also five times more likely to be directly involved in problem-solving, it’s a win-win for everyone.’

Gerhard Veldsman acknowledged that female inclusion in the sector is rising, albeit slowly, and he just had to look around the room to see that.

He says 10 years ago the number of women was much lower, and he praised the club for having a female president and a leadership team currently comprising mainly women.

He also asked how many people at the luncheon knew that the 22nd of November is national mining day?

Not many by the response from the room.

It’s a date that should probably be marked in your diary.