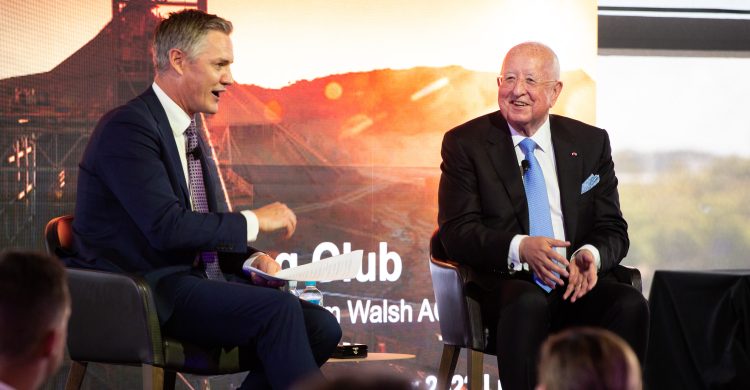 There are very few people in the mining industry who don’t know who Sam Walsh is.

But there were several surprises in his discussion with MC Tim McMillan at the WA Mining Club’s Saint Barbara luncheon.

The retired, former CEO of Rio Tinto admitted he’s terrible at golf, is a passionate supporter of the arts, plays the trumpet with an army reserve band and likes to collect antique milk jugs.

There were 999 people at the final luncheon event of the year, the largest number ever, but they were all silent as Sam spoke of his past and tackled thorny topics like downsizing operations.

Sam Walsh may be recognised in the sector, but he became a household name when he was awarded an Office of the Order of Australia in 2010, recognising his distinguished service to mining and the community.

He had already been awarded WA Citizen of the Year in the Industry and Commerce division in 2007.

But the accolades don’t end just here in Australia.

For his ongoing work and involvement in Japan over 40 years, he received the Order of the Rising Sun from the Japanese government, an honour established in 1875.

He showed his medal to thundering applause.

Like so many who have made their way to the top of business, his childhood wasn’t without real challenges.

His father died at 55 when Sam was only 15 years old, and he instantly became the man of a house of five kids and his Mum.

He says that, combined with his time in the Scouts, is where he developed his leadership skills.

‘When I reflect on it now, I realise I was thrown in at the deep end, and I simply had to keep swimming,’ he says.

It’s interesting to note that Sam Walsh didn’t start his career in mining at all but in the car industry.

After graduating from university with a Bachelor of Commerce, he immediately won a scholarship with General Motors Holden and went to work in the USA.

During his time at GMH, he oversaw a major restructuring of the business.

Sam was then headhunted by Rio Tinto and went to work there, freely admitting he knew absolutely nothing about the mining game.

‘I remember going to my first managing directors conference where they were talking a language that I didn’t understand,’ he says.

‘I truly had no idea what they were talking about; all those acronyms (it’s indisputable there are many acronyms in mining), and I had to get someone to literally translate it for me.’

It would seem that the translation worked wonders; not only was he made head of the company’s iron ore division in 2004, a few years later, he was tapped on the shoulder to become CEO of Rio Tinto.

Rio Tinto also went through a major restructure, and Sam Walsh has been known as an iron hand in a velvet glove, which he doesn’t dispute.

He was unequivocal when asked what single piece of advice he would offer to those in leadership.

‘Trust your own abilities, have faith in yourself, display your ideas and speak up.’

And the antique milk jugs? After all his globe-trotting, he now has 380 of them, a collection that’s very likely to grow.