Penny’s progress – empire steps it up a notch

Penny’s progress – empire steps it up a notch 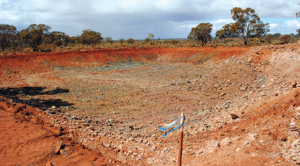 The saying goes “All roads lead to Rome”, but for one West Australian gold and copper play – its road led during 2016 across the ochre sands of that state’s rich Eastern Goldfields region to a gold deposit called Penny’s Find. And as the year draws to a close, Penny’s Find’s majority owner, Perth-based Empire Resources, is busy turning the deposit into an active high-grade open pit gold mine. For Empire, the transition from explorer-developer to gold miner is a welcome milestone – delivering the company not just its first mine and first revenue, but a marked increase in investor awareness, as Penny’s Find entered an Australian gold sector which has been both buoyant and robust through most of 2016. The new mine’s location is in good gold company. It is nestled on an open plain just 50 kilometres north-east of Kalgoorlie – the hub of WA’s gold industry. The bush around this legendary mining outpost plays host to some of the country’s best known and active gold mines and folklore – not the least being the massive Superpit abutting Kalgoorlie’s urban perimeter. Even the main road to the Tropicana gold mine passes directly over the Penny’s Find gold deposit, giving Empire Managing Director and long-time rock kicker, David Sargeant, an unusual decision to make – either mine under the road (operationally unwise for an open pit mine), or move the road! The latter became a six-week construction project backed by the local City of Kalgoorlie-Boulder, diverting 1,800 metres of the Kurnalpi–Pinjin Road to allow uninterrupted regional transport flows and an easier mine start. David Sargeant says Penny’s Find is a worthy find as it promises a dollar-rich early return from mining the gold ore down to a shallow depth of just 80 metres over a year or so. But then deeper gold intercepts tantalisingly open at depth point to a much longer mine life potentially of at least three to four years based on an underground gold mining operation. That scenario is currently the subject of detailed economic and mine modelling studies with ongoing drilling programs to further prove up the underground resource. While that is the future, David Sargeant has commenced Penny’s Find’s mine life with a respectable reserve of around 146,000 tonnes grading 4.62 grams per tonne gold, an inventory expected to deliver just under 21,000 ounces of gold over the year ahead. The ore is being trucked back to Kalgoorlie for toll treatment at a third party mill.

The greenlight for Penny’s Find came towards mid-2016 when a bankable feasibility study based on a gold price of A$1,500 per ounce pointed to the deposit as being a technically sound and financially viable project. For David Sargeant, the sums added up for a mine start, and quickly. “Our study found that just the open pit operation alone would generate something in the order of $7.6 million in free cash-flow in less than a year. And for every $100 increase in the price of gold above A$1,500, the open pit generates another $2 million free cash-flow,” he said. “For a junior gold play, this return is like manna from heaven as for several years, because of the depressed equities sentiment towards the resources sector, it has been almost impossible for junior explorers and developers to raise much-needed funds. “Penny’s Find not only is money in the bank for Empire, it means we have options to use the cash-flow for further mine development or acquisitions while minimising shareholder dilution, and all within a commodity that has continued to show reasonable price stability through uncertain or fluctuating economic times globally. “It has proved an excellent near-term production opportunity for Empire and validates our earlier decision to resume management of the project.” Empire has a 60% stake, with the remainder held by a non-listed third party. Adding to Penny’s Find’s appeal is that it is a stock standard conventional mining operation – a single open pit to a depth of 80 metres using excavators and dump trucks. Even the grade control drilling gave David Sargeant cause to smile, topping out at intersections such as 19 metres at 5.85g/t Au from 3 metres depth and 11 metres at 5.36g/t Au from 28 metres depth – assays that bode well for the future. From a geological viewpoint, Penny’s Find’s gold mineralisation begins at surface and extends to at least 250 metre depth where it remains open. The high-grade gold mineralisation is hosted by quartz veins at the contact between sediments and basalt with both oxide and fresh mineralisation-free milling with 98% and 99% recoveries respectively. There is also a high gravity recoverable gold component, 53% for oxide and 85% for fresh. The owners are not resting on their laurels and, subject to final studies, are eyeing the move to underground mining as the deposit already hosts a deeper resource inventory of 170,000 tonnes at 5.40g/t Au beneath the open pit. But the Empire story is not all about gold. The company’s other strong focus is copper, a deposit of which Empire’s geologists discovered at their 100%-owned Yuinmery project, 80 kilometres south-west of the small town of Sandstone in Western Australia’s Murchison region. The Yuinmery project sits in the base metal-rich but underexplored Youanmi greenstone belt with the principal target being volcanogenic massive sulphide (VMS) deposits. Elsewhere in the world, VMS deposits typically occur in clusters with individual deposits often mined to great depths. Similar VMS deposits are found in WA at the Golden Grove mine to the west and Jaguar mine to the east – underlying the potential of Yuinmery. David Sargeant says the excitement around Yuinmery’s copper profile springs from the calibre of intersections, with a string of high-grade copper-gold results at two of the project’s most advanced prospects, Just Desserts and A Zone. “Our drilling has delivered at least two high-grade copper-gold zones at Yuinmery with intersections such as 23 metres at a grade of 2.7% copper and 4 metres at 4.7% copper”, he said. “We have since calculated a JORC 2012 indicated and inferred resource of 1.27 million tonnes at 1.9% copper and 0.7g/t gold using a 1.0% copper cut-off to a depth of 170 metres below surface at the Just Desserts deposit. The mineralisation remains open at depth so we’re pretty excited about this dual copper-gold pathway in addition to Penny’s Find. “Empire will eventually get back to Yuinmery with more drilling to allow further resource calculations to expand the total resource base there. This will lift the economics of the total project and trigger a development plan.”