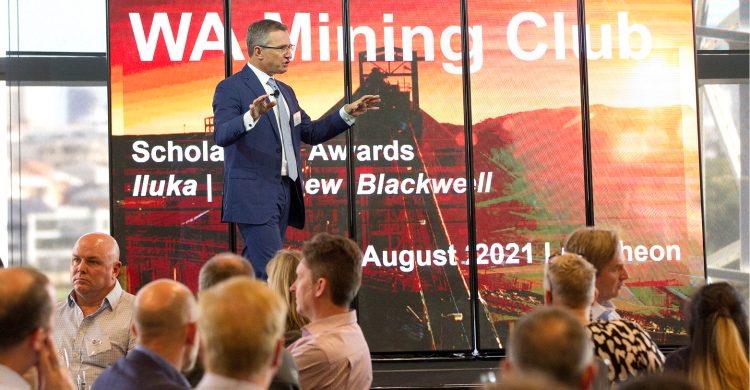 Hard work, good mentors, a ‘give it a crack’ mentality, and a little luck can lead to an incredibly diverse career in mining, according to Iluka Resources head of major projects Matthew Blackwell.

Mr Blackwell shared his journey at the WA Mining Club’s August luncheon as a case study for the opportunities available within the mining industry.

From the time he could spell the words, Mr Blackwell wanted to be an aeronautical engineer, and by the time he turned 18, he was well on his way to achieving his dream.

“I was at Queensland uni, accepted into mechanical engineering, and then into aeronautical NSW,” Mr Blackwell said.

But that dream ended when Qantas stopped offering cadetships due to a pilot’s strike and a family friend encouraged him to pursue a role in mechanical engineering, a more generalist engineering profession.

He chose the gold mining company, “and clearly not for the money”.

“I chose that company because the man who interviewed me, Brenton Smith, was someone I thought I could learn from,” he said.

“I also knew that the company was about to go through an extension.”

However, shortly after joining, Mr Smith moved to a different company and his replacement wasn’t as inspiring, so Mr Blackwell left for Western Mining Corporation.

Mr Blackwell completed his BA by correspondence to fill his evenings, and eventually realised there weren’t many mechanical engineers in leadership roles.

“The leaders were predominantly mining engineers and metallurgists, so I thought, ‘well, what do I do?’,” he said.

“I figured that if I built a plant then I could go on a run it, so I put my hand up to work for WMC’s Queensland fertiliser project as an engineer delivering one of the packages.”

Although successful in getting the job, Mr Blackwell discovered it wasn’t what he wanted; what he really wanted was to become the production superintendent.

This was where good fortune kicked in.

“One day on the plane back to Brisbane after a shift rotation, I was sat next to the production manager,” he said.

“I shared with him what I really wanted to do, shared my background, and that’s how I got my break into production.

“Two weeks later I got the production superintendent’s role, eventually got promoted and given two plants to run.”

After a number of different roles with WMC, opportunity struck again, although this time it was disguised.

“I was heading off to France to celebrate my 30th birthday with some friends when, 18 hours before I was due to fly out, my boss cancelled my leave,” Mr Blackwell said.

“So, the next day, instead of being on a plane, I decided to play a round of golf.

“On my tenth hole, a headhunter rang me up and said he had this opportunity in Thailand and asked if I was happy at my job.”

As luck would have it, Mr Blackwell already had a bag packed and ready to go, and he wasn’t, in fact, happy at his job.

He flew to Thailand for the weekend, signed a contract, and resigned from WMC upon his return.

After a few years, having learned a new language, helped rewrite mining laws to enable mining below 30 feet, and experienced what corruption could do to a good project, Mr Blackwell was offered an opportunity to join Iluka at its US operations.

Although his first impression was that he would be helping Iluka push sand around near beaches where he could go surfing in the morning and fishing at lunch, Mr Blackwell was soon confronted with a much different reality.

“I flew into a hurricane, both metaphorically and physically,” he said.

“My flight into Jacksonville airport was the last before a hurricane hit and I spent a sleepless night with my mattress against the door while listening to the sounds of the storm outside and regretting my decision to upgrade to a higher floor in the hotel while everyone else downgraded to the basement.

“It was similar to the project I entered. The true state of it wasn’t truly understood by the Board, and a year later I made the difficult recommendation to them to shut it down and exit Florida and Georgia.”

Mr Blackwell soon received a surprise visit from the CEO, who let him know he would be repatriated to Australia in six weeks, at which time his employment with Iluka would be terminated.

“In the next breath, he asked me to prepare a report on how to safely close the asset and exit that part of the country in those six weeks,” Mr Blackwell said.

“It was then I had two choices, but instead of telling them to stick it, I got stuck in.”

The report was of sufficient quality that his stay of execution was extended.

When the next CEO, David Robb, started, Mr Blackwell was soon promoted and headed back to Australia to manage Iluka’s land assets.

“It was way out of my comfort zone.

It was then he was offered a job in special projects, which offered a pathway back into the US through Harvard Business School, and Mr Blackwell once again ran the US business.

After moving to an executive role in sales and marketing in Iluka, he moved back to Australia to head up major projects, engineering and innovation.

“I felt like my career had gone full circle and here I was back again looking after my core discipline,” he said.

“Since starting my career, I have had 19 different addresses across the world.”

Mr Blackwell said it was important to build the next generation of mining professionals through its apprenticeships, traineeships, and scholarships.

“Creating pathways into the sector and Iluka through organisations like the WA Mining Club is critical to building a future talent pipeline,” he said.

“Iluka is very proud to partner with the WA Mining Club to offer two scholarships this year in metallurgy and chemical engineering.

He said that it was important to Iluka to invest in its vacation scheme and graduate programs, which open this month, because it is easy for people to forget that they had to start somewhere.

“It’s beholden for us as an industry to remember that and provide opportunities for young people going forward.”

Every year the WA Mining Club, in conjunction with industry co-sponsors, offers a range of scholarships to encourage and foster the development of the next generation of leaders within Western Australia’s mining sector.

This year’s winners include:

Environmental Sciences in the Mining Sector Co-sponsored by Sandfire Resources

Female in a Technical Discipline co-sponsored by Mt Gibson Iron