Miner of the Month with Resources Roadhouse: Vimy Resources 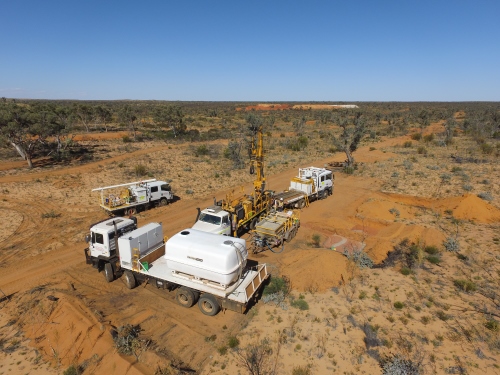 Miner of the Month with Resources Roadhouse: Vimy Resources

Vimy Resources (ASX: VMY) was about to complete the Definitive Feasibility Study at the company’s Mulga Rock uranium project when drilling results from the Ambassador prospect forced a rethink.

Vimy Resources happily delayed the release of the DFS after the Optimisation Drilling program on the Ambassador prospect demonstrated that the resource model being used for the study had greatly underestimated the contained metal in the deposit.

Progress of the DFS included the excavation of two open pits on the Ambassador deposit, from which 75 dry tonnes of ore was mined.

An assessment of the material from the test pits confirmed the contained U3O8 in the excavated material to be 53 per cent higher than expected from the resource model, making an impelling case for Vimy to carry out the Optimisation Drilling program.

The drilling program was carried out over part of the Ambassador East deposit, which fell inside current pit designs.

Key intersections from the drilling included:

“The previous interpretation of the ore body, as it turns out, was conservative,” Vimy Resources managing director Mike Young told The Resources Roadhouse.

“We had assumed there was a grade homogeneity that doesn’t exist and what we now know is that the Ambassador prospect actually contains two very high-grade cores of mineralisation.

“The resultant uplift in contained metal has moved the Mulga Rock project from being marginal on today’s cost curve to being profitable.”

The results led to a Mineral Resource Estimate update on the Ambassador deposit – in particular, the Ambassador East deposit – forming part of a larger resource update, not yet released, of the entire Mulga Rock project.

The key highlights to emerge from the Mineral Resource Estimation (MRE) update being:

• A maiden Measured Mineral Resource for the Mulga Rock project of 12.4 million pounds U3O8, including a high-grade, Measured Resource at greater than 0.11 per cent U3O8 (1,100ppm);

• Further resource work currently underway indicates a 20 to 25 per cent uplift in metal in the entire Ambassador Resource; and

• the Optimisation Drilling results that included the drilling intersections highlighted above.

“The recent Resource upgrade demonstrated categorically that we have more uranium than we had previously estimated,” Young said.

“The possibility of a 25 per cent upgrade overall on the entire Ambassador deposit is very positive for us, but more importantly, the lessons we’ve learned and applied to our models will result in greatly improved economics in the DFS.

“It is an upgrade in contained metal in the same ore body, which is of some significance, because it means all our costs immediately drop by a corresponding amount.”

Having successfully upgraded the Mineral Resource Estimate, Vimy will continue previously announced studies, originally planned for after the release of the DFS, which will now form part of the extended DFS which is called the Final Investment Decision Optimisation program, or FIDO.

During this process, the company aims to assess several options to develop a high-grade, staged start-up to bring the Mulga Rock project into production at the earliest opportunity.

Work will include the completion of a new resource estimate of Ambassador East as well as the Ambassador West, Shogun and Princess prospects using new data and principles identified in a study carried out by Golder Associates in the second half of 2016.

The Golder study supported Vimy’s observations regarding the diamond drilling and that the 2-D grade-thickness interpolation method used by Vimy is entirely appropriate for bulk mining as was previously proposed.

But after the test pits demonstrated a higher-grade zone at the upper ore-waste boundary, Vimy began looking at using more selective mining techniques, requiring the use of a sub-blocked 3-D estimate.

A new Ore Reserve using the new resource models is to be completed, as well as a re-run of the project financials utilising new model metal throughputs.

All these activities, along with all the FIDO alternatives, are expected to be included in an updated and final DFS, which is anticipated to be published in the September quarter of 2017.

“What the 25 per cent increase in the Ambassador Resource does is have a direct, positive effect on our mining costs, which is why we delayed the release of the DFS,” Young explained.

“The new drilling had such a material, positive effect, that it was extremely important we released the right number to the market.

“That allows us to now implement a high-grade strategy, beginning with the development of a four to five-year high-grade pit, consisting of two smaller pits, which are inside the disturbance footprint approved by the Public Environmental Review.

“That gives us the opportunity to start up with a high-value, high-cashflow operation as the uranium price increases.  But these really are just starter pits for the larger, proposed project.”

The upcoming pipeline of work on the Mulga Rock project will follow the recent establishment of uranium converter accounts, which places Vimy in a leading position amongst its contemporaries.

Vimy will produce a high-quality uranium ore concentrate at Mulga Rock, which it aims to ship to conversion plants for further processing into nuclear fuel.

To that end, Vimy has established three uranium converter accounts with Cameco Corporation, New AREVA and ConverDyn, three of the big players in the industry.

The opening of these accounts is vital to the project, as it represents breakthroughs on both the logistical and administrative fronts as all uranium concentrate production from the project will be required to be delivered to a converter account.

Transfers of uranium concentrate will be made from these converter accounts to utility customers so sales invoicing can be finalised.

Uranium mined at the Mulga Rock project will be processed into a concentrate form at site.

The next stage in the nuclear fuel cycle requires the conversion of this concentrate into uranium hexafluoride.

There are several commercial uranium conversion plants operating globally, with Cameco running plants in Ontario, Canada, New AREVA in France, and ConverDyn in the US state of Illinois.

“Because the demand for uranium is rising and supply is expected to contract, to get new production into the market, the prices must go higher or new mines can’t come into production,” Young said.

“We can now talk about today’s cost curve, and how we sit in the middle of it.

“Like I said in our recent ASX announcement, the Mineral Resource Estimate upgrade takes us from being a ‘wannabe’ to a ‘gonna-be’.”

Thanks to Resources Roadhouse