Member of the Month – George Bauk 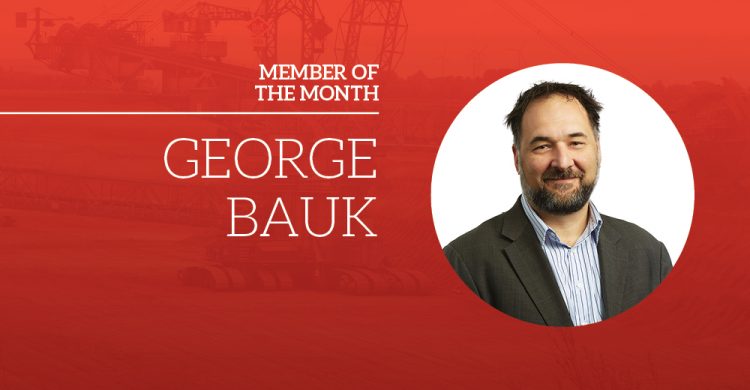 Member of the Month – George Bauk

George Bauk’s 30-year journey in the mining industry began through what he describes as “pure luck” following the need to leave his first job due to difficult circumstances and applying for a job with the TiWest Joint Venture in 1990.

His first 15 years was focused on WA including corporate and FIFO roles and living in Leinster.

“I had the pleasure of working with WMC Resources for 10 years (of the 15) and met many great people,” George said. “Many became lifetime friends and mentors.”

It is for the same reason that George has been a member of the WA Mining Club for the past eight years.

“I like the gathering of people who are part of the industry I love,” George said.

“I also like the great events, excellent monthly luncheons, and the great annual Minesite publication.”

It was during his first job in the mining industry that George met his most memorable boss, the late Alan George.

“He was a great mentor and friend,” George said. “He once shared a job ad with me and told me to apply, which was concerning at first, your boss encouraging you to apply for an external job.

“However, his advice was that it was a great FIFO job and that I needed site experience if I wanted to have a career in mining.”

Although George didn’t get the job, it was the catalyst for his next job in a FIFO role at Outokumpu.

“Alan’s greatest, most memorable advice for me as a young enthusiast upstart was ‘there is a young bull and an old bull on a hill overlooking a herd of cows and the young bull says “why don’t we…”’. Rest in peace Alan George.” he said.

In 2006, he was given his first opportunity as a managing director which took him overseas for exploration, project development, financing and offtake for various commodities in Tanzania, Peru, China and the United States among other countries.

Over the past 10 years George has mainly focused on rare earths.

“It’s been a great experience,” he said. “I had the fortune of leading Northern Minerals from greenfield explorer to producer at Browns Range and raised more than $350m in various forms including equity, debt, convertibles, and debt factoring.”

Currently George has three directorships: at Lithium Australia as Chairman focused on lithium; Blackearths Minerals focused on graphite; and Gascoyne Resources as a Chairman.

He is also working on the listing of private company PVW Resources NL through the takeover by WA gold explorer Thred Resources.

George said the most interesting thing that stands out to him through his journey in the mining sector was the development of the Browns Range Pilot Plant.

“To go from board approval to first production in two years with a two-stage processing plant brought together everything I have learnt over my entire career,” he said.

He said a close runner-up was his first trip to Tanzania where his exploration team came face to face with a hunting team.

“Both parties have rights, but geo picks versus rifles… our team retreated and moved on,” he said. “That was the beginning of an interesting legal process which involved the President of Tanzania.”

George said that the most exotic location mining has taken him to is Eritrea in Eastern Africa, and that he loves travelling to special places including Pucisca, Croatia, where his parents are from, and Italy.

He also likes to spend as much time as possible with his family and drink great red wine and bourbon with friends, preferably while trying to become the most prestigious family in Florence in the game Princes of Florence.

George loves watching sport and playing golf. In fact, if he were not involved with the mining industry, he would have become a professional golfer.

“I just love MJ and would love the opportunity to have a chance for a close time with him and maybe a cigar, I want to hear about the great wines and ask Peter to bring some of his best creations, and I would love to ask God, the creator of all, what He was thinking when He created this great universe,” George said. “And if the dinner went really well, I would ask if there was any chance God could tell me where the mother lode of gold is hidden.”

Apart from ensuring Carlton won the premiership every year, one of the many changes George would like made in the world would be the elimination of domestic violence.

“There is no place in society for this action or behaviour,” he said.