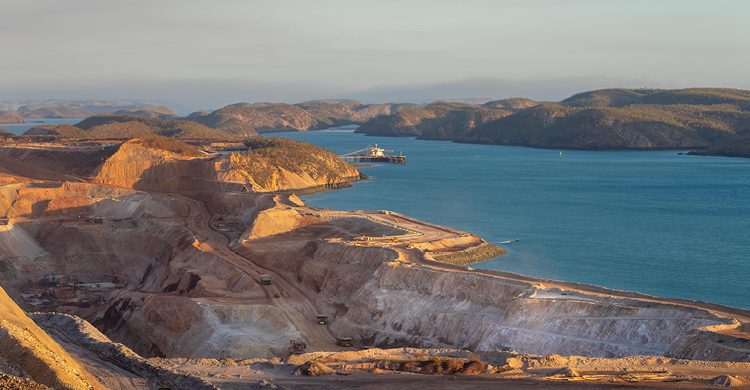 With the Buccaneer Archipelago as a backdrop and a deep main pit well below sea level, Mt Gibson Iron’s Koolan Island mine is one of the more visually dramatic iron ore mines in WA.

Add to that its valuable reserves and resources of hematite iron ore, some of which touch grades of the theoretical maximum of 70 per cent Fe and an average of 65.2 and it’s easy to see why Chief Executive Peter Kerr says the overall company — with a market capitalisation of about $800 million and $440 million in cash — is a “pretty good story”.

Mr Kerr delivered an overview of the company’s operations, which also include mines in the Mid-West, at the WA Mining Club’s October luncheon.

Koolan Island is roughly the size of Rottnest.

Its iron ore was once sought after as ship ballast but is now mined and crushed and shipped direct to customers, making it Australia’s highest-grade DSO iron ore mine.

BHP operated the iron ore mine from the 1950s through to 1993, when operations ceased.

Mt Gibson acquired it through the takeover of Aztec Resources Ltd in 2007. Mining was interrupted in late 2014 when the main pit flooded but continued in satellite pits until early 2016.

Production and sales of the high-grade hematite recommenced in April 2019 after a two-year seawall reconstruction and mine refurbishment program.

“Koolan Island has a tremendous history,” Mr Kerr said. “The Queen, Duke of Edinburgh, and Premier Sir Charles Court visited in 1963 and we are still receiving comments today from people who grew up on Koolan Island who participated in this Royal visit.

“The Britannia moored at the island.

“It’s a small operation by Pilbara standards. What we produce here in a year probably takes some of the major only a few weeks to produce, but it is a high-grade, high-margin operation for us.

“We are working on an extensive mine plan to make sure that the next five years at least go well.

“We have a strategy to think about how we blend the material and how we get good financial returns.

“Koolan Island has the benefit of being able to produce at high grades and that offers protection against some of the lower iron ore prices.

“The reserve is somewhere around 19 million tonnes.

“Our objective is (to) expand along strike to the east or the west. The grades do deteriorate a little but by Australian standards they are still high grades, so that’s our blending opportunity.”

He said the company and staff were benefiting from a new airstrip, which enabled direct flights.

Of the Mid-West operations, Mr Kerr said the company was looking to target first ore sales from its Shine project in mid-2021.

An Extension Hill low grade sales program will continue in 2021.