Member of the Month – Scott Williamson 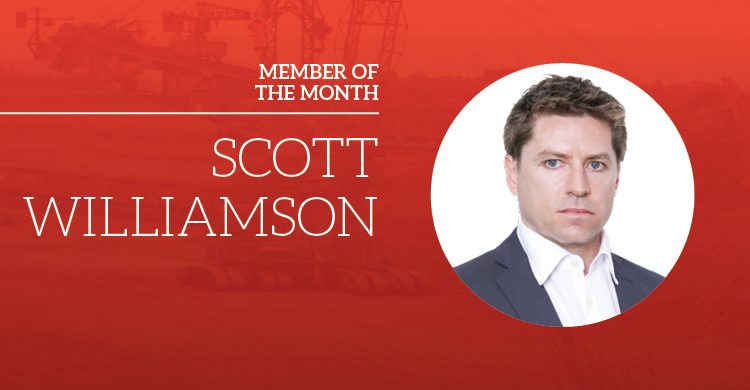 Member of the Month – Scott Williamson

Scott Williamson is a mining engineer with a commerce degree who has led a diverse and interesting career in mining and finance.

Scott started his mining journey 20 years ago as an underground mining engineer in the goldfields of Western Australia after graduating with a commerce degree from Curtin University and the WA School of Mines.

“After university I moved around the mining industry working in many different mines across Australia and Africa,” Scott said.

“I was able to gain broad exposure to the mining industry through working with some of the industry’s best technical people across many different commodities and mining methods.”

One such person was Angelo Morandin who Scott says was his most memorable boss.

“Angelo was the Project Manager of Crakow Gold Mine, Downer ED,” Scott said, “He knew how to have fun and make it fun for me; he even introduced me to the Crakow pub!”

Over his career Scott has honed his corporate and technical capabilities, holding various positions as a mining engineer, resources analyst, and investor relations manager for some of the largest names in the mining industry.

But not keen on the FIFO lifestyle, he became a mine analyst.

He recalls the decision with humour.

“I learnt a lot about capital markets and stockbroking,” Scott said. “But it was really my time in the finance industry and capital markets that set me up for the role of MD.”

In 2017 he was appointed Managing Director of Blackstone Minerals Limited, an ASX listed, leading battery and precious metals exploration and development company with projects in Vietnam, Australia, and Canada.

During his time as MD Scott’s focus has been on restarting the Ta Khoa Nickel-PGE project in northern Vietnam.

“The Ta Khoa project includes the previously operating Ban Phuc Nickel mine, which operated from 2013 to 2016 during a period of low nickel prices,” Scott said.  “We are planning to turn the mine back on with a focus on developing battery metals products for Asia’s growing Lithium-ion battery industry.

“We have a partnership with EcoPro, one of the world’s largest nickel-rich cathode manufacturers, and together we are looking to build a downstream processing facility in northern Vietnam to produce the required inputs to deliver cathode materials into the electric vehicle revolution.”

It was during a site visit with EcoPro in 2019 that Scott last donned his work boots.

“In December 2019, so pre- COVID, we hosted EcoPro on a site visit with their Chairman Mr Lee. It was the first time Mr Lee had been underground.”

Balancing the needs of Blackstone’s stakeholders is another key focus area for Scott.

“When leading a publicly listed company, it is all about dealing with the various stakeholders and most importantly knowing how to keep the shareholders happy,” he said.

“If I could change one thing about the world it would be the Blackstone share price to better reflect the long-term value of our product.”

Working on the Blackstone project in Vietnam is just one of the many interesting places that Scott’s career has taken him. As well as early stints in Africa, he says that looking at a copper project in San Pedro de Atacania, northern Chile, is the most exotic place he has been for work.

If he were not busy leading a global mining company, he would like to spend more time with his family, running, surfing (or trying to) and networking. In fact, it is the latter which Scott says is one of the things he enjoys about the WA Mining Club.

“I have been a member of the WA Mining Club for three years,” he said. “WAMC host some excellent events with interesting presenters and the club is a good space for networking.”

If he were to host a dinner party, he would invite Elon Musk so they could talk EV and battery chemistry all day, Andrew Forrest to discuss mining and agriculture and Ellen DeGeneres to talk about females in industry.