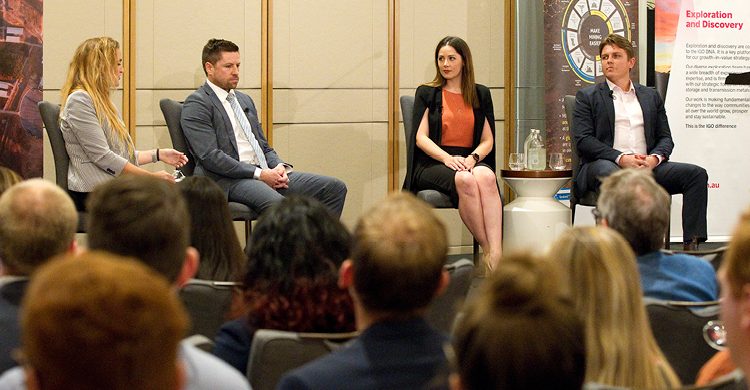 The importance of artificial intelligence (AI) to the mining industry, and its potential impact for green and brown field discoveries, was a hot topic at the recent WA Mining Club Young Professionals Event which explored the theme of Risk, Exploration and Technology.

A panel of industry experts, including Scott Williamson, Managing Director at Blackstone Minerals; Jordan Rogers, GIS Geologist at Gold Road Resources; Alex Dorsch, Managing Director at Chalice Gold Mines,  and Holly Bridgwater, Principal Industry Engagement at Unearthed, led an interesting discussion about the impact of emerging technology and what it could mean for the future discoveries of junior to mid-tier miners.

All panellists agreed emerging technology would have a major impact on exploration activities in Australia and oversees and would see deeper exploration of some previously discarded sites.

Mr Dorsch said he is most excited about AI and the potential it has for new discoveries in existing data.

“AI has the ability to do what a 100 people locked in a room for eight hours would do but has the ability to do that in seconds. It takes a lot of the basic computational crunch work out and can be fed to an algorithm which gives you actual ability to be able to see things in data that the human eye just can’t see,” Mr Dorsch said

“What excites me is how many potential discoveries are out there in existing data that just haven’t been looked at yet with the right subtleties or the right pattern recognition technologies.”

“The geology and geophysics are probably what excites me the most at the moment,” he said.

“The ability to go into areas that have been previously explored with technology that was used 20 years ago or even five or 10 years ago, and be able to go through with modern geophysics to see deeper undercover and to see what the previous explorers didn’t see is exciting.”

Ms Rogers agreed with this sentiment, adding that GIS is evolving every day and that her company is applying new learnings and technology to make discoveries that were not possible previously.

“Gold Road Resources is a sponsor and early adopter of a tech called The Tech Door which we see has massive potential to disrupt the greenfields gold exploration industry,” she said.

“It has the capability of rapid overturn of low-level gold analysis detection levels; we are talking about six to eight hours of up to 20 parts per billion detection levels of field samples. So, you are able to rapidly follow up and turn over projects and targets and assessments.”

She says this has massive ramifications, especially for junior miners which might be restricted in their drill seasons or moving targets through to the market.

While technological advances in exploration have had positive impacts on the industry, it does mean businesses, particularly juniors, may have to adjust their business models to more tech-enabled models.

Chalice has also adopted a new business model called Project Generator, an existing model from North America where a company secures a site, does the initial mapping, sampling and maybe a small drill program. Upon discovery, they hand it over to a joint venture partner who puts up the capital to earn into the site over a number of years while investigating the discovery.

Mr Dorsch said the model has been effective for Chalice.

“Chalice may be the first hybrid Project Generator that’s entered the Australian market,” he said.

“Making greenfield discoveries requires highly specialised competencies so if your business model is based on nurturing and building those competencies in- house then that is going to give you a huge advantage.

“It doesn’t necessarily mean that you need to be able to do everything in the industry, you can just do the early stage exploration work and then move the project to another operator.”

Blackstone Minerals has also taken an innovative approach to its business model and how it raises capital.

“What we have done is a little bit of a different model,” Mr Williamson said. “We went and found the customer first and asked them what they need and then went and looked for the minerals they require.

“It’s all about access to capital, and capital is what drives new business models.”

Regardless of the business model mining companies adopt, all panellists agreed there are still big discoveries to be made, particularly for juniors willing to take a risk and apply new learnings and technology to unlock undiscovered geology.

The WA Mining Club Young Professional events are held quarterly and provide networking opportunities and relevant conversations for mining industry professionals who will form part of our future workforce.