A reflection of Native Title in Australia

A reflection of Native Title in Australia

In a panel discussion about Native Title and Land Access at the WA Mining Club Young Professionals Q3 event, Ms Shanahan said connecting with Traditional Owners was not something that could be put in a corporate box, as shown with the Juukan Gorge incident where Rio Tinto destroyed a 46,000-year-old, heritage-listed Aboriginal rock shelter.

Mr Weaver said the Juukan Gorge incident showed Section 18 consent, which made it legal for Rio Tinto to proceed with the demolition work which led to the destruction of the cave, did not stand up to scrutiny in modern times.

He said that around a week before the cave was destroyed, the Puutu Kunti Kurrama and Pinikura (PKKP) people approached Rio Tinto to tell them they had done a lot of work in the area and understood it much better than when Rio Tinto had received the Section 18 approval, but by then it was too late; the explosives were already placed.

Mr Weaver said the 1972 Aboriginal Heritage Act of which Section 18 is a part, is antiquated.

“It basically says you can do whatever you would like on a piece of land as long as you don’t impact Aboriginal heritage,” Mr Weaver said.

“How do you actually go about operating on land without impacting Aboriginal heritage? Aboriginal people have been here in WA for at least 60,000 years, and I can tell you the evidence of that occupation in the Pilbara is everywhere.

“The fact is, you can’t build a major mining project without impacting Aboriginal heritage.”

Section 18 consent enabled mining companies to operate, but once approvals were given, they could not be revoked.

“Once run, a Section 18 stands forever until you finish the purpose for which it was run,” he said.

“If that purpose is mining, the Section 18 stands until you finish that purpose and submit a report to the premier stating you have finished your purpose.”

The right to use a piece of land with the respective Traditional Owner group comes from the 1993 Native Title Act.

Mr Weaver said the Native Title Act sets the framework for which people or organisations must engage with the native title holders before beginning any activities.

“With mining, there is often a negotiation about what will happen – how will the potential users of the land work with the native title holders,” he said.

“That often happens in a negotiation in a land access agreement, which most of us enter into when we’re building a mining project.”

He said the Act was put in place to ensure both the land user and the Native Title holder benefit from the activities being planned.

On the land user’s side, requirements include ensuring they state exactly how they will leave the environment when they are finished and how they will engage with native title holders for environmental agreements, as well as showing how they will recognise and protect Aboriginal Heritage.

They then need to show how the relationship will benefit the native title owner.

“Fortescue Metals Group approaches this in a way where we focus on creating opportunity for the group we’re working with,” he said.

“For example, we have the Billion Opportunities program and training and development programs, and then there are the cash compensation agreements.”

He said it was difficult to gauge whether land access agreements were enough, because they always reflected the times.

“The first registered Indigenous land use agreement in Western Australia was not registered in the national register until 2004; more than a decade after the Mabo decision was made,” he said.

Ms Shanahan said the Mabo decision was the first time Australian courts recognised the traditional rights and interests that Aboriginal and Torres Strait Islander people had to country.

Before the Mabo decision in 1992, there was a legal concept of Terra Nullius, whereby Australia was registered as unoccupied land.

When Eddie Mabo, the man after which the decision was named, realised through discussions with people at James Cook University that his claim to land wasn’t recognised by the Commonwealth Government, he took his claim to the High Court to recognise the rights of ownership his people had to their country.

“The outcome ended up being positive, even with pushback from the Queensland Government, with the High Court finding the Meriam people were able to demonstrate a continuing connection to their land which predated British colonisation,” Ms Shanahan said.

The decision came 10 years after Eddie Mabo first took the claim to court, five months after he died in 1992.

“Given Aboriginal and Torres Strait Islander culture is the oldest living culture in the world it’s incredible that it took until the early 90s, which is not too distant a memory, for this decision to be made,” Ms Shanahan said.

Mr Haerewa said this was one reason the destruction of Juukan Gorge was so devastating.

“It showed that humans have been living on this continent for tens of thousands of years,” he said.

Mr Weaver said some of the most significant archaeological finds mapping the movement of humankind through the Southern Hemisphere were found at Juukan Gorge.

“They found remnants of a belt in the cave built partly out of hide and partly out of human hair, and DNA testing of the hair linked the belt back to the PKKP people living in that area today,” he said.

“The date of the belt goes back about 26,000 years, while the older parts of the cave go back at least 46,000 years; that’s at least one ice age ago that people were using and living in that cave.”

Mr McGuire urged people to look at a map made by anthropologist Norman Tindale when thinking about the concept of Terra Nullius, which means ‘land belonging to no one’.

“Every part of this wonderful map of Australia, including Tassie, has all this coloured patchwork which indicates that every part of Australia was traversed or occupied by Aboriginal people at some stage,” he said. 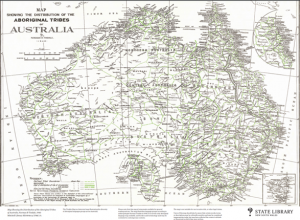 Norman Tindal created the map roughly based on the languages spoken by the Aboriginal and Torres Strait Islander people and the rough borders they shared with neighbouring tribes.

Ms Shanahan noted that there were around 436 determinations of Native Title, reflecting the more than 400 different groups of Aboriginal and Torres Strait Islander people in Australia.